August 04, 2011
On Tuesday night, the celebrated its 17th Annual National Night Out.  This important event was made possible by the hard work and collaboration of the Kings Country District Attorney's Office, the 76th Precinct, the , the Office for Court Administration, PSA 1 Housing Police, Red Hook Court Officers, Partnership for Parks, and the New York Juvenile Justice Corps.
Hundreds of friends and neighbors came together in Red Hook’s for a beautiful summer evening of music, face painting, fingerprinting of kids as a safety mechanism for parents, pony rides, BBQ, resource fair and Youth Olympics!  Speakers included Judge Alex Calabrese, 76th Precinct Captain John Lewis. City Councilpersons Sara Gonzalez and Brad Lander, State Senators Velmanette Montgomery and Daniel Squadron, and DA Charles Hynes.  Representatives from Mayor Michael Bloomberg's Office, Assembly Woman Joan Millman’s Office and the New York City Housing Authority were also on hand to celebrate.  The guest speaker was Red Hook’s own Torrey Maldenado, whose book Secret Saturdays was this year’s official National Night Out book.  A special thanks goes to the Juvenile Justice Corps and the ’s Youth Court and JustArts: Photography members, all of whom volunteered their time to help make this event a success.  Collaborative work like this between law enforcement, politicians, and community has helped make ’s 76th Precinct the safest in the borough and Red Hook the amazing place it is!
Judge Alex Calabrese with Court Officer Leroy Davis 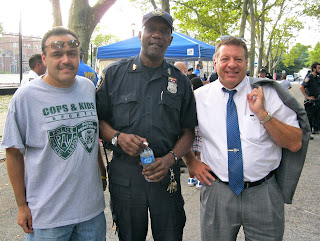 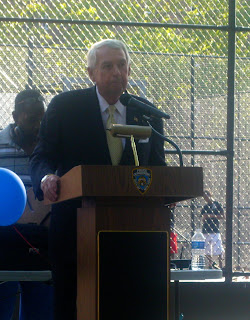 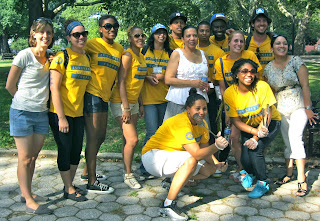 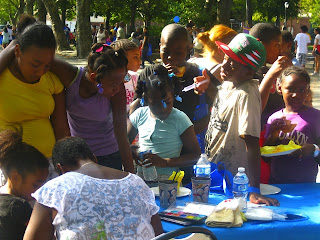 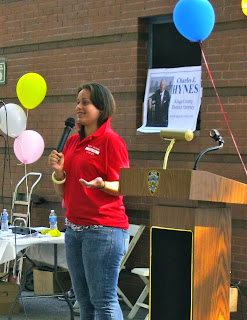 Residents Get Information at the Resource Fair 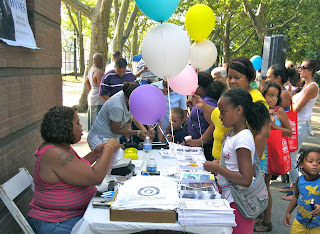 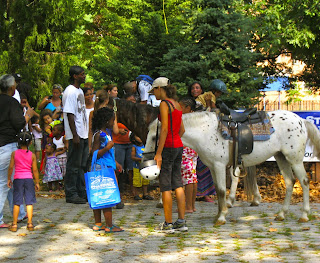 Popular posts from this blog

Rent, Repairs, and Rights: A Guide to Housing Court for NYCHA Tenants

June 09, 2015
On June 4th, a group of the Red Hook Youth Court members and staff went to see the "Theater of the Oppressed NYC" performance at the New School. Before attending this event, the youth court members had no idea that anything like this went on! While there, we learned that 12 different legislative laws were changed through something called "Legislative Theatre." The audience members get to be "spect-actors," which is great because the actual audience members got to participate in the play themselves and share their ideas.

The performances last night were put on by members of the Staten Island Youth Justice Center (part of the Center for Court Innovation Family). These two plays dealt with real life issues such as getting stopped for not paying your bus fare, arriving late to school and getting sent to the principal's office because of the "zero tolerance policy," getting into fights at school, not knowing one's rights, and being racially …
59 comments
Read more

September 30, 2013
Last Friday we held a graduation for our AmeriCorps members, the last class of the New York Juvenile Justice Corps. Over the past year, the members have served throughout the Center for Court Innovation's New York City projects at various positions within our courts and community programs. They served as a bridge to the communities we work in, and provided valuable support to our projects and various initiatives. The members will be missed and we wish them the best in all their future endeavors.

The Red Hook Community Justice Center
Brooklyn, New York, United States
Launched in June 2000, the Red Hook Community Justice Center is the nation's first multi-jurisdictional community court. The Justice Center seeks to solve neighborhood problems like drugs, crime, domestic violence and landlord-tenant disputes. A single judge hears neighborhood cases that under ordinary circumstances would go to three different courts—Civil, Family and Criminal. The goal is to offer a coordinated, rather than piecemeal, approach to people's problems. The Red Hook judge has an array of sanctions and services at his disposal, including community restitution projects, on-site educational workshops and GED classes, drug treatment and mental health counseling—all rigorously monitored to ensure accountability and drive home notions of individual responsibility. The courthouse is also a hub for an array of unconventional programs that engage local residents in "doing justice." These include after school programs, community service projects improve conditions of disorder and a youth court where teenagers resolve actual cases involving their peers. The idea here is to engage the community in aggressive crime prevention, solving local problems before they even come to court.